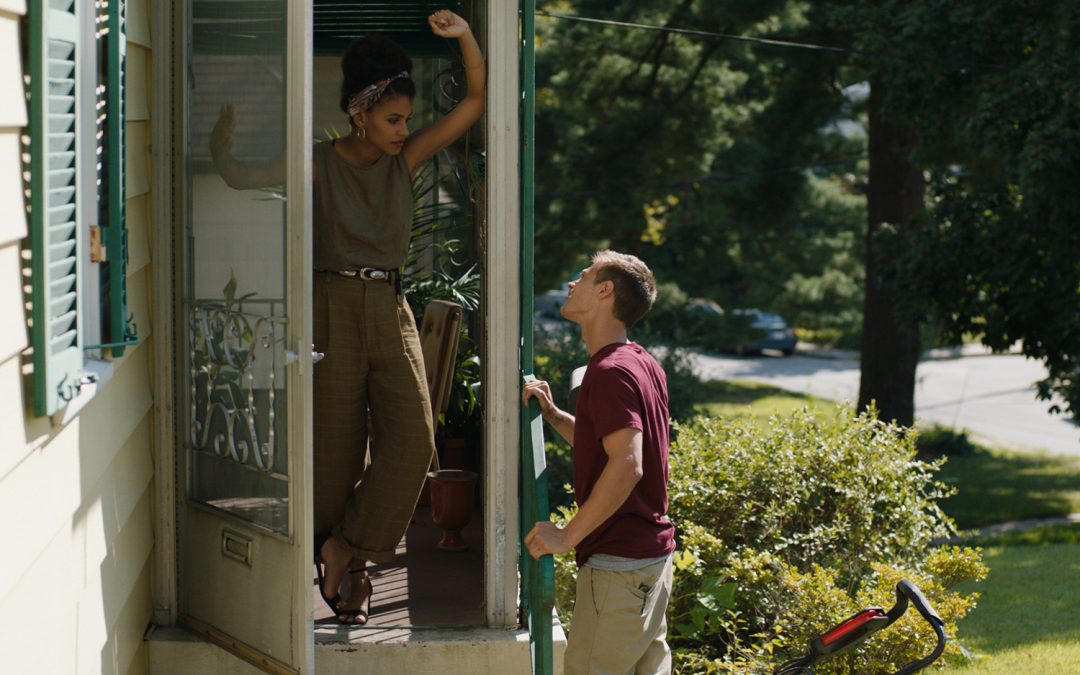 Sollers Point is a story that is uniquely Baltimore, although many of its themes are universal.

The film is importantly set around Sollers Point Road, which runs from Holabird Avenue almost to Broening Highway. It is in this stretch of Dundalk that Keith (McCaul Lombardi) once again finds himself. He’s just out of prison and is still under house arrest, living with his Dad (Jim Belushi). Keith is struggling to reestablish himself, and break free of the bonds forged behind bars, within a community scarred by unemployment, neglect, and deeply entrenched segregation. His intentions are in the right place and he possesses an aggressive desire to get back on his feet, but as he taps into all his familiar resources, he finds that he may be reverting to his old ways.

Following its premiere at the San Sebastian Film Festival, Sollers Point enjoyed an impressive tour on the international festival circuit, featuring in esteemed programs including International Film Festival Rotterdam, CPH:PIX, and the Viennale. Then, just last weekend, the Maryland Film Festival was proud to host the Baltimore homecoming of Porterfield’s impressive new work.

Now, we enthusiastically launch the theatrical premiere of Sollers Point, here in Baltimore, ahead of NYC, LA, and beyond. Don’t miss your chance to experience this exciting moment for Baltimore film culture at the SNF Parkway. Opening weekend will be particularly special, as Porterfield will appear in-person to host the 7:30 PM screenings on Friday, May 11th and Saturday, May 12th.

For a taste of the film and the two post-screening Q&A’s the Baltimore-based director will host, check out the below interview conducted by Hannah McGill, courtesy of Oscilloscope Laboratories.

This is your fourth feature, and all have been shot in your hometown of Baltimore, Maryland. Could you describe your relationship with the city, and why it continues to inspire you as a setting?

Despite its relatively small size and the fact I grew up here, Baltimore still contains a lot of mystery and surprise for me. It’s really a city of neighborhoods, with very clear distinctions along lines of race and class. So many of these neighborhoods have their own distinct history and character—I think I could spend a lifetime exploring them on film, and only scratch the surface.

Where did the story for Sollers Point begin, and how did it evolve?

I was thinking of people I’ve known adjusting to life after prison, specifically those for whom home detention was a part of their probation or re-entry. The image of a man with an ankle bracelet unable to leave his house really stuck with me.

All of my films deal with the idea of community, and how it relates to place. In this case, it required a little more research, because I haven’t lived in this particular part of Baltimore. The neighborhoods around Sollers Point are demographically similar to the neighborhood where I grew up, which is depicted in my previous films Hamilton and Putty Hill, but have their distinctions and differences too. Sollers Point is actually part of Baltimore County, at a relative remove from the city. It’s near the former site of Bethlehem Steel, where my grandfather worked, and home to many steelworkers and their families. Its proximity to the water and maritime tradition are facets of Baltimore life that I hadn’t explored in my previous films.

My stories start with an image that might be generic, or even iconic, but evolve through extensive location scouting, which grounds the story and my writing. This phase is typically part of the preproduction process; for me, it happens early, during the script stage. I’m driving around, looking at things, meeting people, casting even, while the writing is still taking place. All of that informs the screenplay. Getting into the location early, intimately, helps me understand what I want to achieve during production.

“I’m interested in clear and economical composition that will allow the environments that the characters inhabit to breathe.”

You have a terrific cast, from newcomer McCaul Lombardi in the lead, to an unusual turn by Jim Belushi, and fascinating character actors in small roles. How did it come together?

I’d cast all my previous films myself—this was my first time working with a professional casting director, Jessica Kelly, who is based in New York. She and her team focused on 10-12 principal and supporting roles, while I and a former student, Abby Harri, cast locally for the other supporting roles.

It was my producer, Alexandra Byer, who found McCaul Lombardi. He had just come off Andrea Arnold’s American Honey, and when we learned he was from Baltimore, I set up a meeting at a local diner and we hit it off immediately. As soon as I met him, the search was over.

Jim Belushi came through an agent at ICM who really dug the script. It was a similar thing to Lombardi: we connected right away. Jim really got the role and understood the world of the film. He comes from a working-class family in Chicago, has a son close to Keith’s age, and is really looking for interesting projects that he connects with. Such a generous actor. I felt the same about Zazie Beetz (Courtney). And Allyssa Bresnahan (Elaine) is a wonder. I had never heard of her before Jessica sent me her taped audition. I had written that role based on a woman I’d known since I was thirteen years old, a friend and neighbor, and I honestly had no idea how I’d cast her—but Allyssa hit it so perfectly.

Independent movies about troubled characters often look raw and scratchy. You really go against that here: the film has a classical beauty.

I can appreciate the grainy, raw aesthetic of certain films that depict a similar milieu, but it’s just not my style. I’m interested in clear and economical composition that will allow the environments that the characters inhabit to breathe. I’m good at finding locations, and I want to treat them naturalistically—but all the credit for the design of light and color goes to my cinematographer, Shabier Kirchner; his gaffer, Cedric Cheung-Lao; and our production designer, Sara K. White. They are attuned to the emotional tenor of the scene in a visual way.

Keith’s clearly a stuck person, but for reasons that aren’t immediately apparent. What’s your sense of what his issues are? And is his taste in music significant?

Keith is really close to my heart. Developing his character was an exercise in studying my own id. I’m Keith, if I’d made other choices. I’m a college dropout, bi-polar, divorced. Nothing ever made sense to me. I had no proper rites-of-passage. I was just lucky to access a good education, and that’s because my parents were teachers. If I’d had less access to education, I’d probably be seriously considering the options that Keith is considering. Keith is impulsive, reckless, self-hating above all. How to depict a character who is beloved by all, who still feels no self-worth? That’s a challenge—but one I wanted to approach.

The music choices also felt really close to home. At some point, I made the clear choice that Keith listened to metal; that was his music. It seemed the best way to get an audience inside his head, whether they like it there or not.

The issue of drug use among ordinary working Americans of many class and age groups seems pervasive, and yet not much discussed. Is it an issue on which you have strong feelings?

I definitely have strong feelings about drugs in my city and its depiction on screen. Drugs, particularly heroin and crack cocaine, affect people from all walks of life. I think it’s a disease and it’s also an economy. I wanted to depict both aspects, but in a way that did not pass judgment on the users or the dealers. I’ve had friends who sell drugs, friends who use drugs, and friends who have died from drugs, so it’s very important to me that I approach the subject with respect.

Still from Matthew Porterield’s SOLLERS POINT, which opens at the SNF Parkway on Friday, May 11th.

What about the gang content? Did you base that on real research? What did you want that interaction to reveal about Keith’s options?

Anybody who’s been in prison has dealt with gangs. I talked with friends who have done time, and others who have spent time with gangs on the streets, and tried to create a fictional framework that felt real enough. While I was struggling with this aspect of the story, I met the writer Peter Nathaniel Malae. His counsel on the subject was invaluable, and his writing, particularly his collection of short fiction, Teach the Free Man, was a big reference for me.

McCaul and I also visited a state prison, and I think that was really helpful for him as he tried to understand Keith’s character and his options. But, honestly, the gang content was where I took the most creative liberties. It’s a closed society, and I can only approach that world from the outside, so I tried to keep it very non-specific.

Keith’s social world is racially mixed, and not necessarily in predictable ways. Did you write the characters “color-blind”; or were their specific racial identities a big part of your thinking?

I had a very specific idea of how Keith navigates the racially segregated city of Baltimore, and that was reflected in the script. When we began casting, I started having doubts: ideologically, I wanted to approach the casting color-blind. I took race identifiers out of the script, but then readers were confused, adrift, not understanding some of the subtler dynamics between characters. It felt more honest to stick with my intent and through that logic reach a place that reflects the diversity of the city. In the end, all of the characters were cast as scripted.