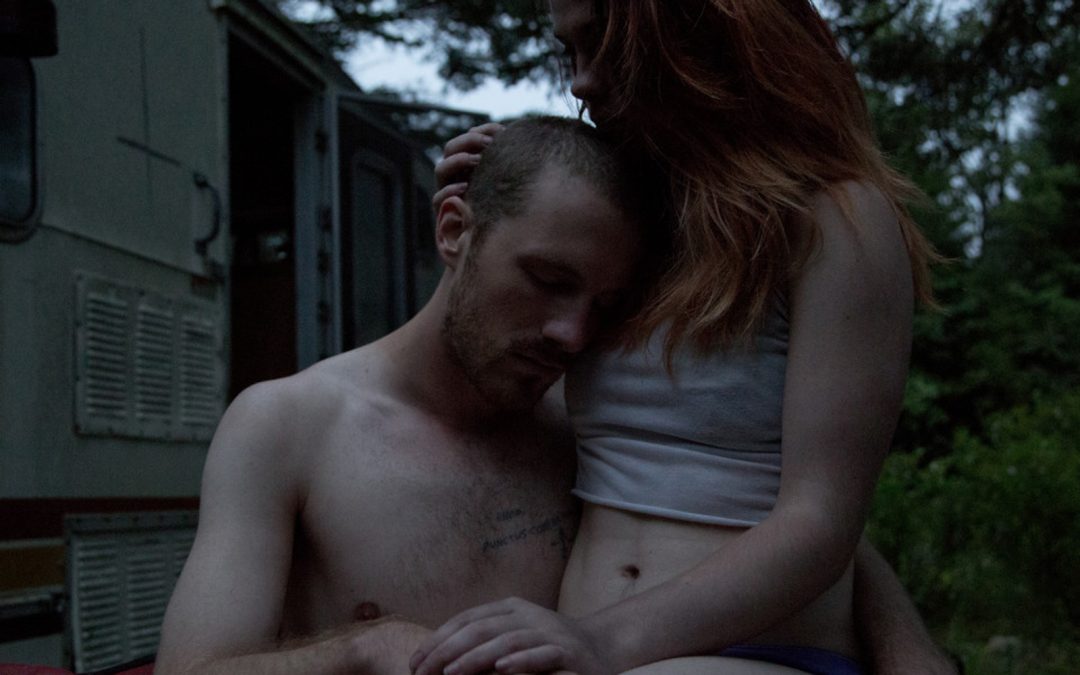 Ashley McKenzie’s Werewolf is a startling feature debut centered upon a young homeless couple living on the margins of society in a small Canadian town.

Sleeping where they can, trying in vain to coax extra methadone from clinic employees, all the while dragging around a decrepit lawnmower in search of drug money, Blaise (Andrew Gillis) and Nessa (Bhreagh MacNeil) push through the throes of addiction—finding the little meaning life offers them in each other and their daily fix.

As the visceral, poignant, and visually arresting Werewolf progresses, it both deepens and contorts, becoming a harrowing portrait of codependency and abusive behavior as much as it is one of addiction. In doing so, it recalls such great films as the early Al Pacino classic Panic in Needle Park (1971) and, more recently, the Safdie Brothers’ Heaven Knows What (2014). One also sees in its dreamy, melancholy lensing, its expert direction of non-professional performers, and its strong belief in regional cinema both the influence of Bresson and an aesthetic kinship with the films of Matt Porterfield.

MdFF was extremely proud to offer our 2017 festival audiences the U.S. premiere of Werewolf, which screened to great acclaim at such prestigious international festivals as TIFF and the Berlinale. On the heels of winning the Toronto Film Critics Association prize for best Canadian film of the year, we’re thrilled to bring it back to the Parkway for its Baltimore theatrical run, beginning this Friday, March 9th.

In anticipation of her film’s return, director Ashley McKenzie was kind enough to answer some questions from our programming team.

Films about addiction can feel preachy, or false, or smack of macho nihilism—but yours feels so honest and tonally assured. What was your window into this subject matter, and what research, experiences, or collaborations went into developing the right narrative approach and tone?

I saw Werewolf as beginning where those kinds of films about addiction left off—in recovery where the drama grinds to a halt and life is a series of waiting rooms, doses, clinic appointments, therapy sessions, and employment attempts. My window into the subject matter was via dialogues I was having with a friend that was struggling with mental illness and feelings of being under-stimulated, immobilized, and trapped on the island where we live. And, yes, addiction was one of those compounding factors as well. He was a very creative type, and I began to write the character of Blaise as a vehicle for him to play a character in my next film. Nessa emerged as the vehicle for my preoccupations in the exchange. Then, as is often the case in my writing, everything in my life is filtered through the film and the narrative expands in new directions. The approach and tone was guided by remaining rooted to the subject matter on a very human level. We made no attempts to be cool.

As the film progresses, it arguably becomes more concerned with co-dependency and other forms of relationship dysfunction. How did you work with your actors to create a palpable emotional foundation and backstory for these heavy emotions to be explored?

I worked with two very intelligent individuals that knew how to privately prepare in order to anchor themselves in the roles and also utilize their bodies as instruments. They did homework to teach themselves how to prepare in these kinds of ways before the shoot. Andrew Gillis (Blaise) and I talked about the script most of the time I was writing, so there were many conversations around dysfunction, toxicity, and compassion in past relationships. We knew these characters pretty intimately and had shared sources of inspiration, so there was an inherent foundation. During shooting, Bhreagh MacNeil (Nessa) and Andrew lived in the same house, travelled to locations together, and spent most of the time on set within a few meters of one another, which we all felt was helpful in allowing them to forge a palpable closeness.

You get fantastic performances out of largely non-professional actors. Is there a philosophical preference (like, for instance, Bresson) in casting performers who may not have been in a film before, or does this come about through more practical and organic considerations?

All of the above. I’m still early in my career and working out my philosophical preoccupations, so things tend to be more nonverbal at this point. But I’ll hone and distill that with time, and perhaps feel the need to articulate like Bresson. His saying, “An actor in cinematography might as well be in a foreign country. He does not speak its language,” is a comment I like to play off of when thinking of integrating actors from outside Cape Breton into my films. They’re not really going to speak our language. My films deal with class, and you can only stretch so far from the source when attempting to garner authenticity around that. Perfect teeth are often a deal-breaker for me whenever I get close to casting a professional actor. A lot of the critical work is done in the testing and selection of nonprofessional actors, and then I try to get out of their way on set so as not to spoil their way of being. There is some direction, sculpting, and taking away, but much of what I want to communicate is already transmitted via the lived-in textures they bring to the screen.

“We used a soft approach to shooting built around being in tune with where energy would coarse in a scene… giving things space to develop and being open to new ideas, looking outside the boundaries of the frame and letting that permeate into scenes on the fly.”

Did you watch and discuss any films with your cast and/or DP as points of reference prior to shooting?

A film I shared with both cast members was Antoine Bourges’ East Hastings Pharmacy (2012). It’s a hybrid drama in which the director workshopped scenes with opiate-dependent people of them getting their daily dose of methadone. It’s sensitively made and captures the textures of what everyday recovery looks and sounds like. Andrew emailed me after watching it: “If that film went on for 48 hours I’d watch every minute of it.”

I shared a collection of films with Bhreagh that included Rosetta, L’enfant, Fish Tank, and The Panic in Needle Park. She was a 19-year old theatre student with no screen credits when we cast her in the lead role two weeks before shooting. I wanted to give her a sense of scale in terms of calibrating the performance for the camera and my style of storytelling.

The only film I recall my DP, Scott Moore, and I watching was Varda’s Vagabond. I revisited the opening scene of Mona’s corpse being exhumed and the motif of right to left moving tracking shots. That film grammar didn’t translate to Werewolf so much, but is always inspiring to watch.

The biggest reference for Scott and I was an American Cinematography article, Cosmic Questions, about the making of Malick’s Tree of Life, where DP Emmanuel Lubezki talks in detail about the rules and methodology of that shoot. Their concept of introducing “torpedoes” in scenes, shaping a shooting process around live environments, and hustling to harness natural light were inspiring to us. We used a soft approach to shooting built around being in tune with where energy would coarse in a scene, foregoing yelling “Action!” and “Cut,” whispering subtle directions during takes, giving things space to develop and being open to new ideas, looking outside the boundaries of the frame and letting that permeate into scenes on the fly. Scott used the term “effective inspired frugality” to describe our approach to setups, and I threw around “poetic portraiture” when talking about composition.

It seemed like you really enjoyed exploring Baltimore when you were here for the festival. Remind me, was this your first time here—and can you share some of your impressions of the city?

It was my first time in Baltimore and just my third time in the United States in my lifetime.

I couldn’t have hoped for a better U.S. premiere than the experience I had at Maryland Film Fest. My impressions are saturated with vibrancy, friendly faces, grittiness, and community spirit—all ingredients I appreciate in a city. The first thing I did was walk from downtown to The Land of Kush (great food and staff). I passed a lot of derelict buildings on the way that made me feel immediately at home, as the urban landscape of Cape Breton Island is filled with abandoned architecture and remnants of a heyday and booming working class that has long since disappeared.

The opening of the Parkway Theatre left a really heartening impression. My producing partner and I dream of opening a rep cinema in the vein of the Parkway in our community, but it feels impossible. Witnessing the beauty of that venue and all the passion and love that went into the venture by a grassroots group was so inspiring to me. Also, the local people I connected with were incredibly warm and hospitable. I loved the long chats I had with festivals volunteers at the screening venues and over supper at the closing night BBQ.

Probably my favorite thing about Baltimore though was the queer, artsy, and diverse culture. Those things are not front-and-center in Cape Breton, so it was invigorating to be stimulated in that way. I spent a lot of time at Red Emma’s Bookstore Coffeehouse, and dream about their coffee to this day. I visited some great dive bars that had a ton of character and Berlin-like vibes. My last night in the city, I saw a poster for an upcoming Buffy the Vampire Slayer burlesque show, and thought to myself that maybe I should just stay in Baltimore… forever.

Still from Ashley McKenzie’s WEREWOLF, which opens at the Parkway Theatre on March 9th.

What’s the last film that blew you away?

Phantom Thread. It was the first time in a while that I’ve been romanced by a movie. I forgot the feeling of walking into a theatre and being suspended, one on one, with a film in a sweepingly intimate way. The opener of Alma speaking in hushed tones by a fireplace—which, with a lack of reverse shot, feels like direct address—was the perfect invite into an immediate relationship with the screen. I felt like a floaty teenage girl again, while still wading through granular realities of love and life that we experience with age. Vicky Krieps as Alma made every second of screen time expansive. The clarity and composure of her performance flooded my brain with serotonin. Her statement “No one can stand as long as I can” keeps running through my head.

What are you working on now?

I’m writing a long feature about deviant young women that contains multiple narratives flowing into one another, tapestry-style. I plan to shoot it here in Cape Breton in the next year or two.

Where can readers see more of your work, and where can they follow you online?

I have some of my short films online at grassfirefilms.ca and can be followed online here: