Set in contemporary Chicago, amidst a time of turmoil, four women with nothing in common except a debt left behind by their dead husbands' criminal activities, take fate into their own hands, and conspire to forge a future on their own terms. 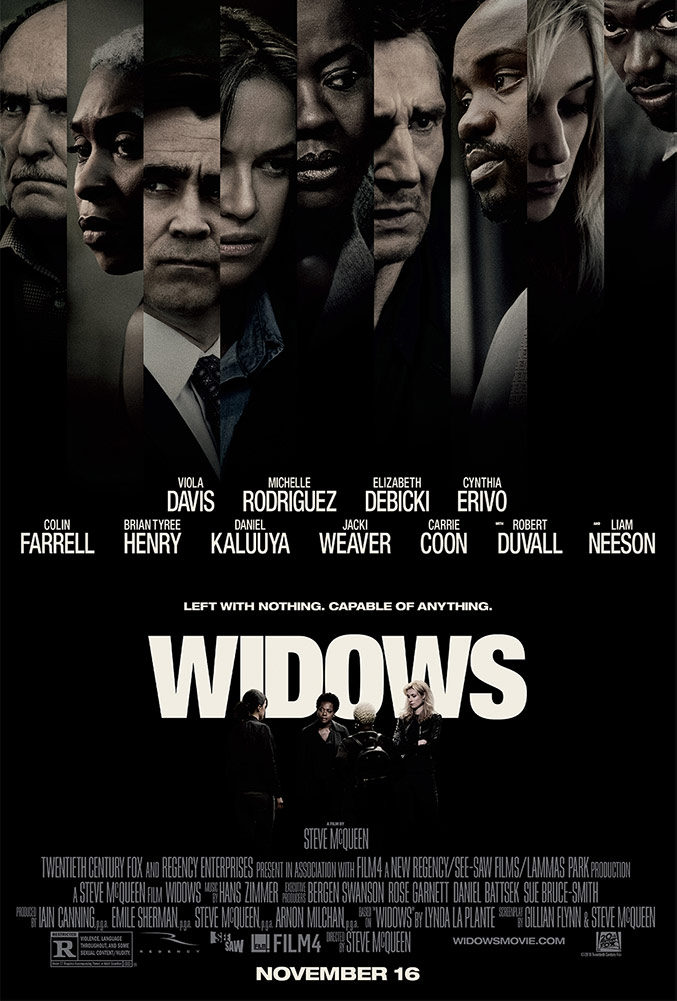 From Turner Prize-winning artist turned Academy Award-winning director Steve McQueen (12 Years a Slave) and co-writer and bestselling author Gillian Flynn (Gone Girl) comes a blistering, modern-day thriller set against the backdrop of crime, passion and corruption. Widows is the story of four women with nothing in common except a debt left behind by their dead husbands’ criminal activities. Set in contemporary Chicago, amid a time of turmoil, tensions build when Veronica (Oscar winner Viola Davis), Linda (Michelle Rodriguez), Alice (Elizabeth Debicki) and Belle (Cynthia Erivo) take their fate into their own hands and conspire to forge a future on their own terms. Widows also stars Liam Neeson, Colin Farrell, Robert Duvall, Daniel Kaluuya, Lukas Haas and Brian Tyree Henry.

“Widows truly gives Viola Davis the leading film venue worthy of her talents and gives female characters the space to play a dirty game. The story is very ambitious with its twists and turns, but McQueen rises to the occasion and executes with flare.”
— Joi Childs, Shadow and Act

“The director of 12 Years a Slave has lost little of his talent for moral shock, and the new film retains a clear-eyed vision of what has changed, and just how much has not, in the contesting of American power.”
— Anthony Lane, The New Yorker

GRADE: A-
“McQueen has made a first-rate genre exercise that doubles as a treatise on race and gender, juggling dramatic payoff with heavier themes.”
— Eric Kohn, IndieWire

“This is not some faux-empowerment story dressed up in infantilising ‘girl power’ credo; Widows is unapologetically honest about the way in which these women have come to depend on the men in their lives, and what desperate, bloody work it is to unleash their personal narratives from those of their husbands.”
— Rebecca Liu, Another Gaze

4/4 STARS
“McQueen’s masterful film is the kind that works on multiple levels simultaneously—as pure pulp entertainment but also as a commentary on how often it feels like we have to take what we are owed or risk never getting it at all.”
— Brian Tallerico, RogerEbert.com