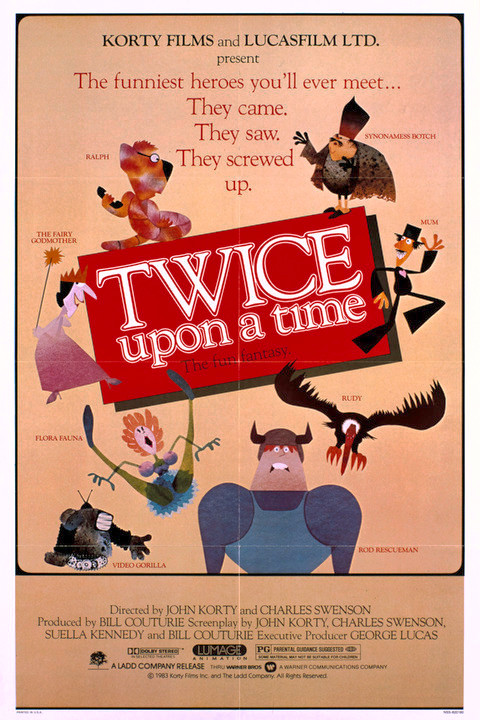 Sweaty Eyeballs Animation Series is excited to present Twice Upon a Time, a hidden gem of animation from the early 1980’s that helped propel the careers of Henry Selick (director of The Nightmare Before Christmas, 1993 and Coraline, 2009) and David Fincher (director of Se7en, 1995 and Fight Club, 1999). With George Lucas as executive producer and seasoned animation directors John Korty (best known for his work on Sesame Street) and Charles Swenson (best known as the director of the X-rated cartoon Dirty Duck, 1974), the film seemed to be poised for success, but it flopped at the box office. Revisiting the film over 30 years later it stands out as a landmark of innovative animation techniques, visual effects, and dry dialogue driven humor.

Twice Upon a Time integrates multiple styles of animation with a diverse array of textures and media including photographs and live-action footage, utilizing a technique called the Lumage Process. In the world of the Murkwoks where nightmares are made, the evil Synonamess Botch hatches a scheme to make bad dreams take over the world and rule supreme by stopping time. Only Ralph and Mumford, misfits from the cheery land of Frivoli, can stop him with the help of FGM a wise-cracking Fairy God Mother.

This screening will be of the original theatrical release and the one that gained a cult following later airing on HBO in the mid 80’s. This version is not the director’s cut, but rather the version that producer Bill Couturié took control of and had more adult versions of the dialogue re-recorded. Some language may not be suitable for small children.