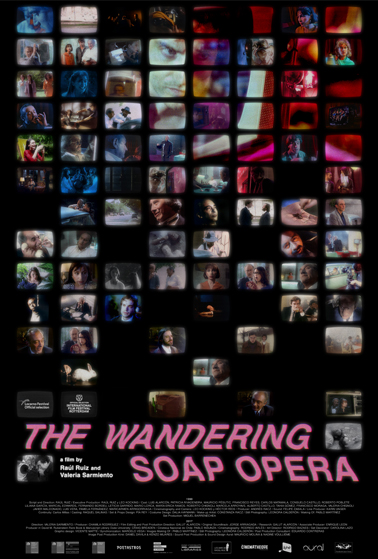 David Sterritt is a film critic, author, teacher and scholar. He is most notable for his work on Alfred Hitchcock and Jean-Luc Godard, and his many years as the Film Critic for The Christian Science Monitor, where, from 1968 until his retirement in 2005, he championed avant-garde cinema, theater, and music. He has a PhD in Cinema Studies from New York University and was, until 2015, chair of the National Society of Film Critics for ten years. He has also served two terms as chair of the New York Film Critics Circle and ten years as co-chair of the University Seminar on Cinema and Interdisciplinary Interpretation at Columbia University, where he taught for 25 years. He is now a film professor at the Maryland Institute College of Art and professor emeritus of theater and film at Long Island University.

Filmed by Chilean master Raúl Ruiz in 1990, but left unfinished until it was completed by his wife and collaborator Valeria Sarmiento in 2017, The Wandering Soap Opera is a dreamily interconnected series of vignettes that spoof on telenovela conventions while reflecting Ruiz’s feelings upon returning to his native Chile after more than 15 years away. In one episode, a man seduces a woman by showing her his muscles, which are actually slabs of raw meat slapped into her hand. Later, the man has a gun pulled on him when he accuses a poet of plagiarism. Meanwhile, through the television screen, five women have lost their husbands after an earthquake and embrace a better future together. All along, back and forth across screens, people are watching.

Shot in gorgeous Super 16mm and featuring one zany performance after another from a cast having the time of their lives, The Wandering Soap Opera is a glorious sendup of the telenovela, which, at the end of Augusto Pinochet’s dictatorship, Ruiz called the very best lens through which to understand “Chilean reality.”

“The purest and deepest of cinema’s dreams. I could luxuriate in this film’s environs forever! The completion of this work is a major event in the history of fun!”
— Guy Maddin, Director of My Winnipeg, The Forbidden Room, and The Saddest Music in the World

“Clearly relishing the stylistic leeway afforded by the genre—the film’s prismatic color palette and exaggerated decoupage provide enough aesthetic pleasures to make one mourn yet again the absence of one of cinema’s great stylists—Ruiz takes as fanciful an approach to the film’s visual design as he does its object of critique.”
— Jordan Cronk, Film Comment

“Deadpan and over-the-top, these scenes make for a view of turbulent reality that is episodic and nonsensical—and wholly Ruizian.”
— Robert Abele, Los Angeles Times

“It was clearly made with slender financial means and abundant enthusiasm, and it functions simultaneously as a critique of the self-serious idiocy of authority and a celebration of the anarchic power of imagination.”
— A.O. Scott, The New York Times