Billy the Kid and Doc Holliday fight over possession of a stallion and a sultry Mexican girl. 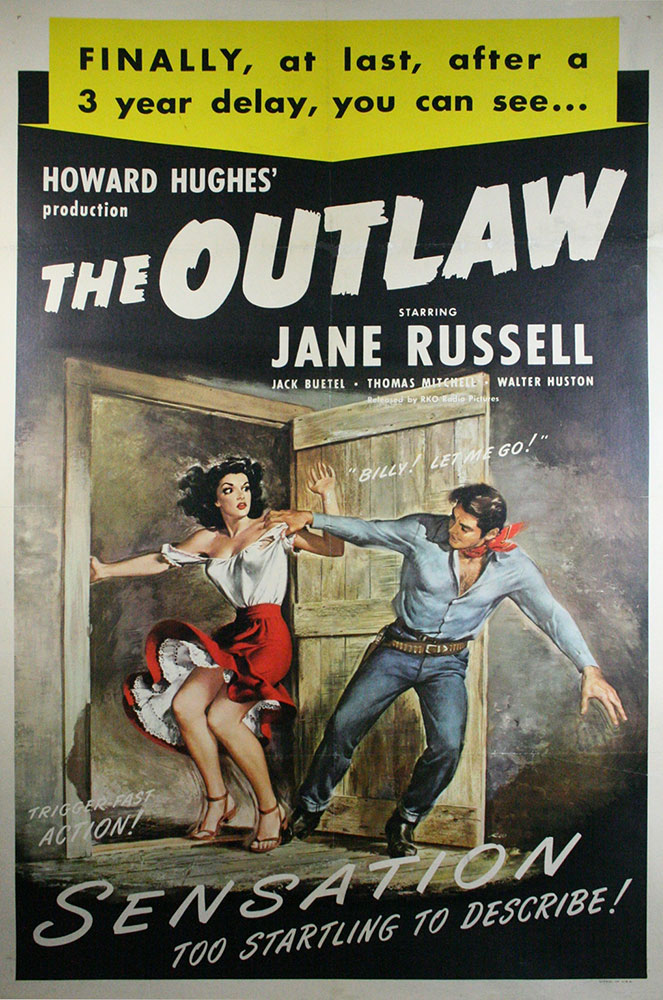 This controversial and legendary western launched the career of sex goddess Jane Russell (Gentlemen Prefer Blondes) and is infamous due to its violations of the Production Code. The Outlaw follows the friendship of Billy the Kid (Jack Buetel, Rose of Cimarron) and fellow outlaw Doc Holliday (Walter Huston, The Treasure of the Sierra Madre), as they both pursue the affections of Holliday’s girlfriend, Rio (Russell), while being chased through the desert by Sheri Pat Garrett (Thomas Mitchell, Stagecoach) and his posse. Financed and directed by reclusive tycoon Howard Hughes (Hell’s Angels) — his second and final directing effort — the film’s release was delayed several years due to censorship issues and public outroar relating to Russell’s abundant cleavage! It finally received a wide release by United Artists in 1946 and became a big box office hit. Legendary filmmaker Howard Hawks (Rio Bravo) co-directed the film with Hughes, but was not credited.

“One of the weirdest westerns of all time, reflecting the eccentricities of its producer and credited director, Howard Hughes.”
— Jonathan Rosenbaum, The Chicago Reader

“The film would be G-rated today, but at the time, that hint of skin was enough to send people scampering for a little water to put on their brow.”
— Christopher Null, Filmcritic.com