In 1825, a young Irish woman and an Aboriginal tracker—each marked by trauma from violence-filled pasts—chase a British officer through the rugged Tasmanian wilderness, bent on revenge. 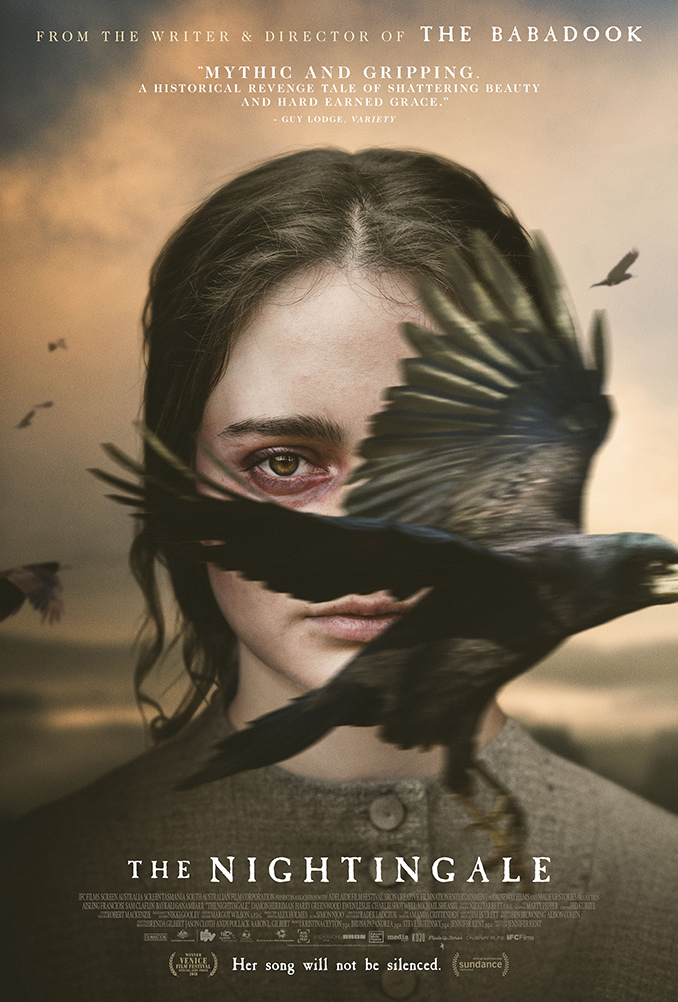 The Nightingale is a meditation on the consequences of violence and the price of seeking vengeance. Set during the colonization of Australia in 1825, the film follows Clare, a 21-year-old Irish convict. Having served her 7-year sentence, she is desperate to be free of her abusive master, Lieutenant Hawkins who refuses to release her from his charge. Clare’s husband, Aidan, retaliates and she becomes the victim of a harrowing crime at the hands of the lieutenant and his cronies. When British authorities fail to deliver justice, Clare decides to pursue Hawkins, who leaves his post suddenly to secure a captaincy up north. Unable to find compatriots for her journey, she is forced to enlist the help of a young Aboriginal tracker, Billy, who grudgingly takes her through the rugged wilderness to track down Hawkins. The terrain and the prevailing hostilities are frightening, as fighting between the original inhabitants of the land and its colonisers plays out in what is now known as ‘The Black War.’ Clare and Billy are hostile towards each other from the outset, both suffering their own traumas and mutual distrust, but as their journey leads them deeper into the wilderness, they must learn to find empathy for one another, while weighing the true cost of revenge.

The Nightingale features potentially triggering acts of sexual violence towards women, violence towards children, and violence motivated by racism. We encourage you to read through the below notes and view the film in its entirety. This film presents complex issues and does not attempt to offer neat solutions to systemic issues of race, misogyny, sexual violence, or classism. While the film’s narrative is fictional, it is inspired by historical events. The film presents the opportunity to open up an honest dialogue about cycles of violence, the repercussions of colonialism, and the value of experiencing challenging, troubling works of art. While art can make viewers uncomfortable, it can also inspire reflection on the importance of empathy for our survival.

“One of the most memorable works in its genre—a parable that never turns violence into a spectacle, but is resolutely committed to expose the poisonous double prism of racism and sexism it feeds upon.”
— Leonardo Goi, The Film Stage

“This is a profound and difficult film, an attempt to grapple with the existence and mindless perpetuation of evil, and to suggest both the fleeting satisfaction and the eternal futility of vengeance. Nothing about it is easy, and everything it shows us matters.”
— Justin Chang, Los Angeles Times

“[A] both-barrels-blazing statement of intent from a filmmaker determined not to be limited or labeled by the popular meme-ification of her debut, with the muscular formal grasp to match her ambitious reach.”
— Guy Lodge, Variety

“Acclaimed filmmakers often face the challenge of big expectations on their second features, but Kent joins the ranks of sophomore filmmakers whose new movies expand on their debuts in startlingly ambitious ways.”
— Michael Nordine, IndieWire