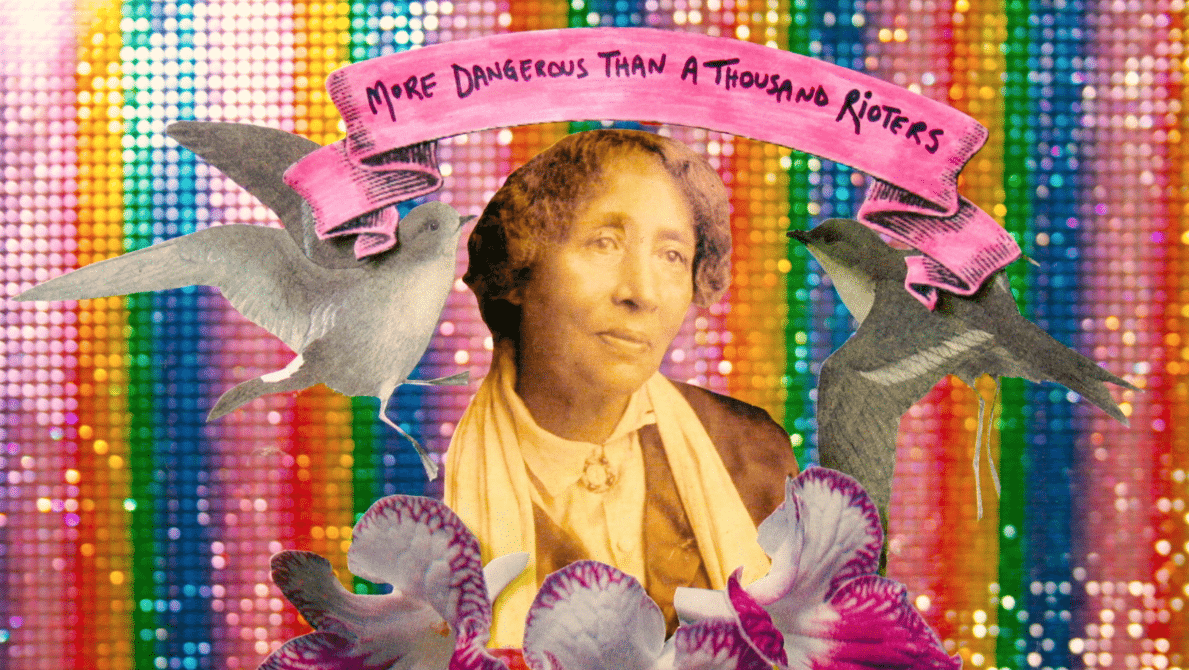 Herstory of the Female Filmmaker, 15 min., 2009
Set to a raucous Riot Grrrl soundtrack, Gallagher’s animation shares the *herstory* of some of motion picture’s greatest (and often overlooked) contributors.

Pennsylvania, 2 min., 2012
By painting frames of 16mm clear leader, the filmmaker explores the feelings and sentiments evoked when returning home to Pennsylvania, after being far away for far too long.

Ceallaigh at Kilmainham, 7 min., 2013
A 16mm collaged and handcrafted exploration of land, roots, and the strength of the women in the filmmaker’s family.

Pearl Pistols, 3 min., 2014
An animated glitter bomb and resurrection of a speech by the radical and revolutionary civil rights leader Queen Mother Moore

FROM ALLY TO ACCOMPLICE, 18 min., 2015
“To-day at last we know: John Brown was right.” -W.E.B. Du Bois. An experimental essay in three movements that explores the importance of being more than an “ally” in struggle, by sharing histories of committed accomplices John Brown, Marilyn Buck, and others. The film also delves into the history of the landscape and former prairie that was the earth on which Brown’s militants trained. In the face of exploitation of people and destruction of land, radical struggle cultivates new life.

Do You Want to Go for a Drive? 5 min., 2016
An essay film that illustrates the importance of consent and explores sexual agency, love, pleasure, mutual desire, violence, vengeance, the moon and the sky. The title, a call and response with the final line of the film (“It’s you I really want to drive”), more importantly serves to commence the entire viewing experience with the asking of a question- which is how all sexual encounters should begin, with the asking for consent.

More Dangerous Than a Thousand Rioters, 6 min., 2016
An experimental animated documentary exploring the powerful and inspiring life of revolutionary Lucy Parsons. She was an organizer first and foremost, and led an inspiring life engaged in the struggle against capitalism. As a woman of color who was married to a famous white male anarchist, she is often unfairly and frustratingly overlooked in many labor histories. Born in the early 1850s, Parsons moved to Chicago as an adult, where her politics quickly radicalized. Parsons would go on to become one of the most powerful voices in the labor movement, helping to found the legendary Industrial Workers of the World. She dedicated her entire life to fighting for the rights of the disenfranchised.

My Gossip, 3 min.; 2017
A live action animated essay that explores the importance of women’s close friendships.