Ornette: Made in America

Exploring the rhythms, images and myths of America seen through they eyes of an artist’s ever-expanding imagination and experience. Presented by True Vine Records. 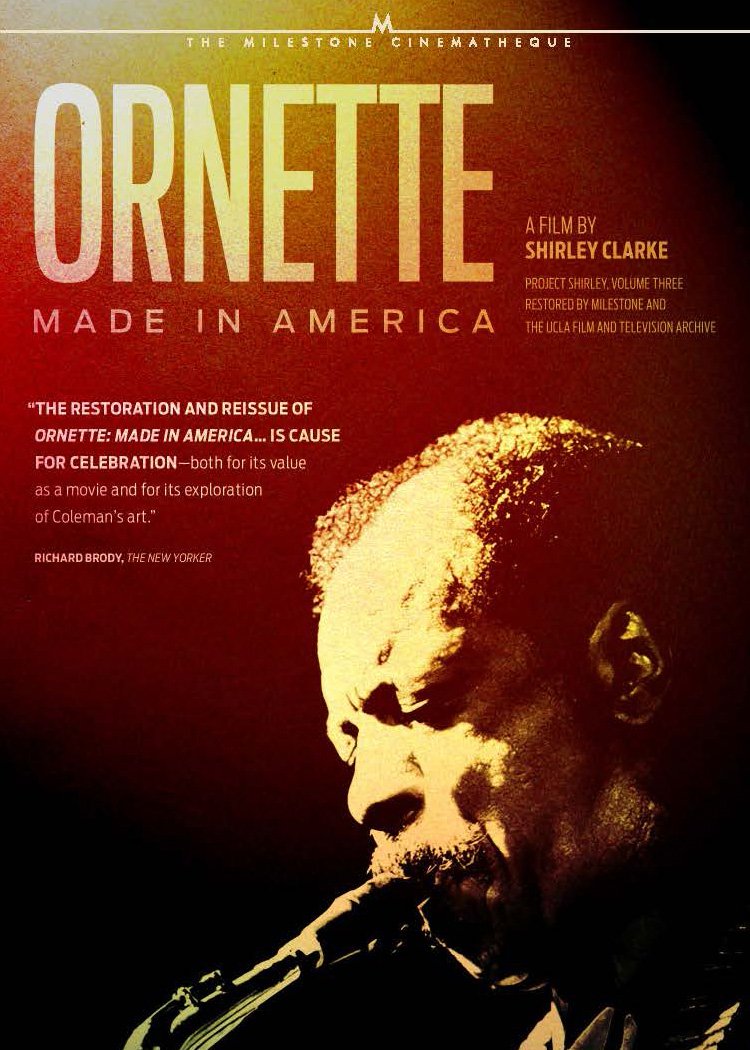 Ornette: Made in America

Joining as our host and presenter of the evening is our friend and Station North neighbor, Jason Willett from True Vine Record Shop. When asked why he chose to present Ornette: Made in America for our North & Charles series, Jason said:

I love this film for a hundred reasons, but I’ll mention one. I believe that what Shirley Clarke, who directed this film (her very last film), Ornette and myself have in common is that we are beatniks. This is my take on what beatniks were and are: people who reject the psychological illness that is in abundance in our mainstream (and somewhat outside of mainstream) society. It’s an illness that destroys free thinking & true creativity. It’s an illness that is rampant with manipulation, dominance, sterilization, greed, fear, brainwashing and soulless imitating, that can be seen much more clearly if you are disconnected from it. Some beatniks stop right there and spend their life stuck in a state of disgust and snobbery. This is an important phase of the transformation, but the beatniks that I relate to much more are the ones who go beyond that point and return to the mainstream to make a change in a positive way.

What I love the most about beatniks is that whether they’re in the former or latter camp, differences of race and sex aren’t important. It’s about where your head is at. This is why in the 1950’s, in America, if you walk into a public space and find a room of different races of people sharing ideas and enjoying and/or hating life together, most likely you’ve walked into a beatnik club. Most other places were segregated. Ornette created a musical approach called harmolodics, which allow the musicians to express themselves as they are feeling at the moment, in an individualistic way, while still being in unison of intention with the other musicians and with what they are expressing together. There is no expectant dominant tonal center, nor is there any right or wrong tempo for any of the musicians. In my opinion, harmolodics can be seen symbolically outside of music as a way of being together with others in unison as individuals. In unison, in that what unites us is much greater than our differences, whether you know it yet or not.

North & Charles
A unique monthly series bringing the best of Baltimore to the movie theatre, with a new community partner each month!

Ornette: Made In America captures Ornette’s evolution over three decades. Returning home to Fort Worth, Texas in 1983 as a famed performer and composer, documentary footage, dramatic scenes, and some of the first music video-style segments ever made, chronicle his boyhood in segregated Texas and his subsequent emergence as an American cultural pioneer and world-class icon. Among those who contribute to the film include William Burroughs, Brion Gysin, Buckminster Fuller, Don Cherry, Yoko Ono, Charlie Haden, Robert Palmer, Jayne Cortez and John Rockwell.

Ornette: Made in America is essential for anyone hoping to understand the history of jazz and the fertile creative exchange that highlighted the 60’s and 70’s in America. It is a portrayal of the inner life of an artist-innovator.

The innovative techniques that director Shirley Clarke and producer Kathelin Hoffman employed in this film very closely parallel the music of the man who is its subject. Clarke defied traditional documentary formats to reveal Ornette’s extraordinary vision through her equally extraordinary filmmaking artistry.

Critically acclaimed when it released in 1985, the film is even more significant today, as Coleman’s influence has increased, while Clarke and Hoffman’s interpretation of his life and times remain as fresh and exciting as ever.

The film focuses on the struggles and triumphs of Ornette Coleman’s life as well as on the inspired intelligence that spawned his creativity and ensured his success. Clarke’s footage includes Ornette in conversation with family and friends; excerpts of interviews, riffs and travels, along with footage of his performances—in his hometown of Fort Worth, TX, in New York, in Morocco and beyond—presents the most comprehensive record of his career available.