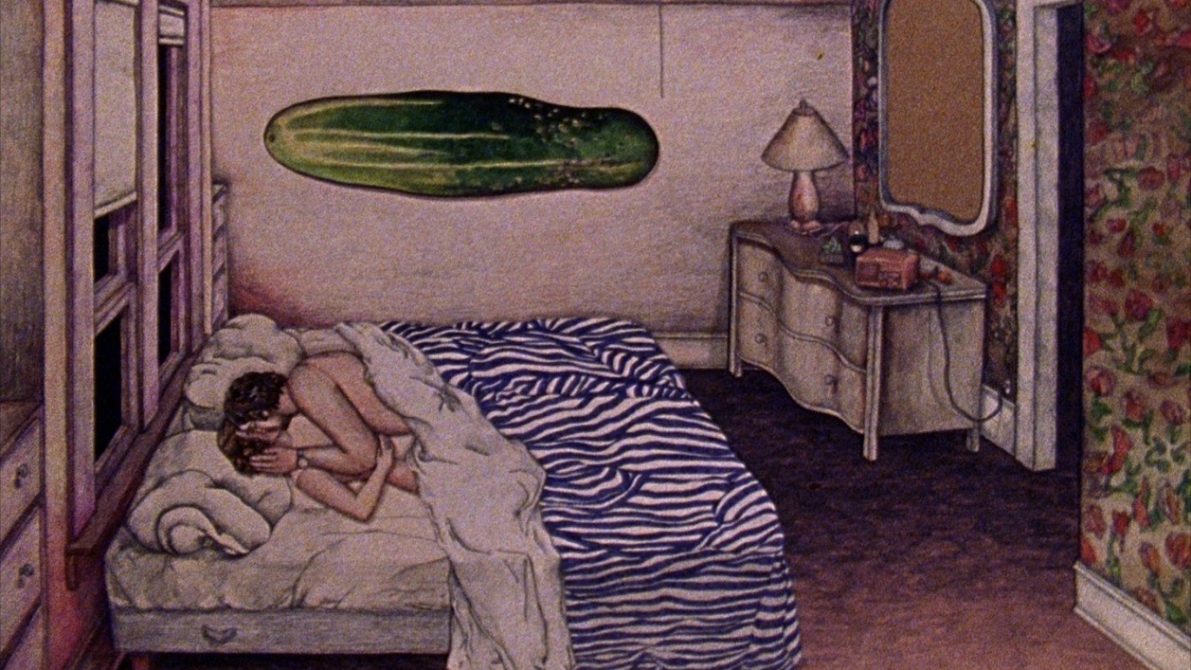 Anselmo
Chick Strand, 1967, 16mm, color, sound, 4m
“An experimental documentary in the sense that it is a symbolic reenactment of a real event. I asked a Mexican Indian friend what he would like most in the world. His answer was, “A double E flat tuba.” I thought it would be easy to find one at the Goodwill very cheap. This wasn’t so, but a sympathetic man in a music store found a cheap but beautiful brass wrap-around tuba. I bought it, smuggled it into Mexico and gave it to my friend in the desert. The film is a poetic interpretation of this event in celebration of wishes and tubas.” (Chick Strand)

Throbs
Fred Worden, 1972, 16mm, bw & color, sound, 7m
“Fred Worden’s magical CalArts thesis film collages all manner of spectacle (car crashes, football, circus, television) into a hypnotic and dream-like reverie that feels somehow personal, as if a revisited catalog of images that might once have given him delight in his youth. The eclectic source material, woven together with genuine and unexpected beauty on the optical printer, moves from refrain to refrain with a fluidity that suggests a free-associating cinematic consciousness, a momentary pause in the now on the then.” (Mark Toscano)

The Secret Story
Janie Geiser, 1996, 16mm, color, sound, 8.5m
“The Secret Story arose as a response to several beautifully decayed toy figures from the 1930s that were given to me as a gift. These figures, and other toys, objects and illustrations that I found from the period between the world wars, suggested a kind of unearthed hidden narrative which I have attempted to re-piece together, as if these figures were the hieroglyphics of a just-forgotten tongue. THE SECRET STORY revolves around the central figure of the woman, and her girl-double, who look somewhat like versions of Snow White. She wanders through landscapes of rivers and floods, home and war, and memory and illness, culminating in an ecstatic walk in the forest, suggesting both the dark and cathartic trajectories of the richest fairy tales.” (Janie Geiser)

Back in the Saddle Again
Scott Stark, 1997, 16mm, bw, sound, 8m
“A family’s playful interaction with a 16mm sound movie camera, singing along as a group with Gene Autry’s title song in front of the camera, combines western fantasy, American kitsch, gender posturing, deterioration of the film’s surface, the wonderment of the cinematic process, and the use of controlled accidents to shape the form of the film. My only intrusion on the footage was to print it first in negative, which adds a bleak, mysterious edge to it, and to print it again in positive, which seems to answer many of the questions raised in the first part.” (Scott Stark)

Chronicles of a Lying Spirit by Kelly Gabron
Cauleen Smith, 1992, 16mm, color, sound, 6m
“Chronicles was really fun to make in part because it was truth and out-and-out lies combined, written history and oral history combined. It’s my theory, I guess, that Black women have always been doing incredible things throughout history and that we’ve been able to do these things in part because no one pays much attention to us. While you can feel – I hate to use the word – disempowered by being invisible, I think a lot of women have been resourceful in making invisibility a shield that protects them while they do and experience amazing things. Chronicles was an homage to all the accomplished Black women in global history who are not documented anywhere.” (Cauleen Smith)

Roslyn Romance (is it really true?)
Bruce Baillie, 1976, 16mm, color, sound, 16m
“My Romance is intended for something like “broadcast” form, or like a correspondence … not so much for showing a big batch of it at one sitting. … The work seems to be a sort of manual, concerning all the stuff of the cycle of life, from the most detailed mundanery to … God knows.” (Bruce Baillie)

Women I Love
Barbara Hammer, 1976, 16mm, color, sound, 25m
“Women I Love is a series of cameo portraits of the filmmaker’s friends and lovers intercut with a playful celebration of fruits and vegetables pixilated in nature. Culminating footage evokes a tantric painting of sexuality sustained.” (Barbara Hammer)
Restored by Electronic Arts Intermix and the Academy Film Archive through the National Film Preservation Foundation’s Avant-Garde Masters Grant program and The Film Foundation. Funding provided by the George Lucas Family Foundation.

« In Our Right Mind: Alzheimer’s and Other Dementias’ Impact in Communities of Color
A Beautiful Day in the Neighborhood »