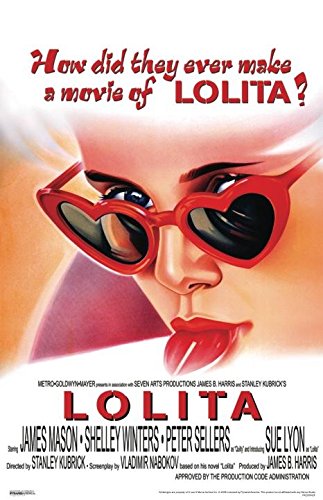 Stanley Kubrick’s sixth film, a brilliant adaptation of Vladimir Nabokov’s darkly humorous and controversial novel, tells the story of Humbert Humbert (James Mason), a middle-aged British novelist who is both appalled by and attracted to the vulgarity of American culture. When he comes to stay at the boarding house run by Charlotte Haze (Shelley Winters), he soon becomes obsessed with Lolita (Sue Lyon), the woman’s teenaged daughter. Humbert marries Haze to get closer to Lolita, his real target, though he faces stiff competition from a pursuing Clare Quilty (Peter Sellers). Made from a double-entendre-filled (and Oscar-nominated) script by Nabokov himself.

“The surprise of LOLITA is how enjoyable it is: it’s the first new American comedy since those great days in the 1940’s when Preston Sturges recreated comedy with verbal slapstick. LOLITA is black slapstick and at times it’s so far out that you gasp as you laugh. At its best (which is about half the time) it makes most of the “New American Cinema” look square. An inspired Peter Sellers creates a new comic pattern—a crazy quilt of psychological, sociological commentary so “hip” it’s surrealist.” — Pauline Kael, Partisan Review (1962)

“Most critics today agree: Lolita is Kubrick’s most misunderstood and underrated film. Stylistically it’s a transitional work, marking the turning point from a naturalistic cinema (Paths of Glory, Spartacus) to the surrealism of the later films. Reality and fantasy coexist for the first time in a Kubrick film in the bizarre figure of Quilty’s ‘Dr. Zaempf.'” — Gene Youngblood, Criterion Collection’s The Current (1992)