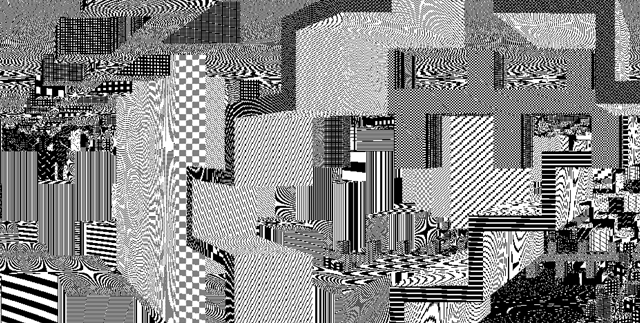 This program is co-sponsored by The MICA Undergraduate Film & Media Program. Special thanks to Department Chair, Nadia Hironaka.

GREEN | RED (2014, 10.5 min, digital)
Burr conjures a shape-shifting world where the sidewalks are endless, the radio is playing electric, and the night sky is broken open by a cataclysm of shuddering stars.

THE MESS (2016, 14 min, digital)
This film follows the perspective of a solitary woman who descends into an abandoned subterranean ‘arcology.’ She is tasked with cleaning up the mess that has spawned from this feral structure, becoming lost in the process.

ABOUT
Peter Burr (b. 1980) is an artist from Brooklyn, NY. A master of computer animation with a gift for creating images and environments that hover on the boundary between abstraction and figuration, Burr has in recent years devoted himself to exploring the concept of an endlessly mutating labyrinth. His practice often engages with tools of the video game industry in the form of immersive cinematic artworks. These pieces have been presented internationally by various institutions including Documenta 14, Athens; MoMA PS1, New York; and The Barbican Centre, London. Previously Burr worked under the alias Hooliganship and founded the video label Cartune Xprez through which he produced hundreds of live multimedia exhibitions and touring programs showcasing a multi-generational group of artists at the forefront of experimental animation. His practice has been recognized through grants and awards including a Guggenheim Fellowship (2018), Creative Capital Grant (2016), and a Sundance New Frontier Fellowship (2016).

“Burr’s art conjures the future – projection screens picturing high density structures that resemble malls populated by people who move in slow motion; text by video game designer Porpentine that describes opinionless cultures; undulating black and white patterns designed to mesmerize the viewer. Unlike movies, though, which tend to center around heroes and villains, there’s no morality attached to this environment. It’s not good, or bad. It just is.” –Paddy Johnson, ART F CITY