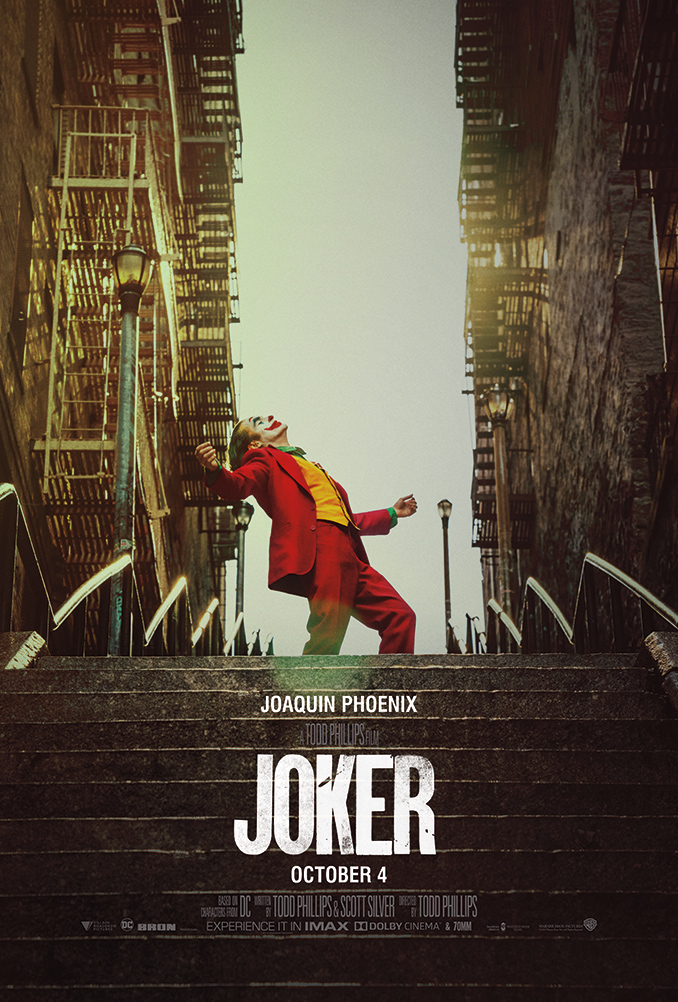 Director Todd Phillips’ Joker centers around the iconic arch nemesis and is an original, standalone fictional story not seen before on the big screen. Phillips’ exploration of Arthur Fleck, who is indelibly portrayed by Joaquin Phoenix, is of a man struggling to find his way in Gotham’s fractured society. A clown-for-hire by day, he aspires to be a stand-up comic at night… but finds the joke always seems to be on him. Caught in a cyclical existence between apathy and cruelty, Arthur makes one bad decision that brings about a chain reaction of escalating events in this gritty character study.

“What a gloriously daring and explosive film Joker is. It’s a tale that’s almost as twisted as the man at its centre, bulging with ideas and pitching towards anarchy. ”
— Xan Brooks, The Guardian

“It’s chilling and ironically, still a fun way to spend two-hours escaping into a fictional world. Joker is such a great film that ventures away from the comic books and dives more into reality.”
— Catalina Combs, Black Girl Nerds

“Bold, devastating and utterly beautiful, Todd Phillips and Joaquin Phoenix have not just reimagined one of the most iconic villains in cinema history, but reimagined the comic book movie itself.”
— Terri White, Empire Magazine

“A dazzlingly disturbed psycho morality play, one that speaks to the age of incels and mass shooters and no-hope politics, of the kind of hate that emerges from crushed dreams.”
— Owen Gleiberman, Variety

A note about costumes:

Parkway team members are film fans too and we often enjoy expressing our enthusiasm through creative attire. You are welcome to join us and wear a costume to the Parkway; however, face paint and masks are not permitted.