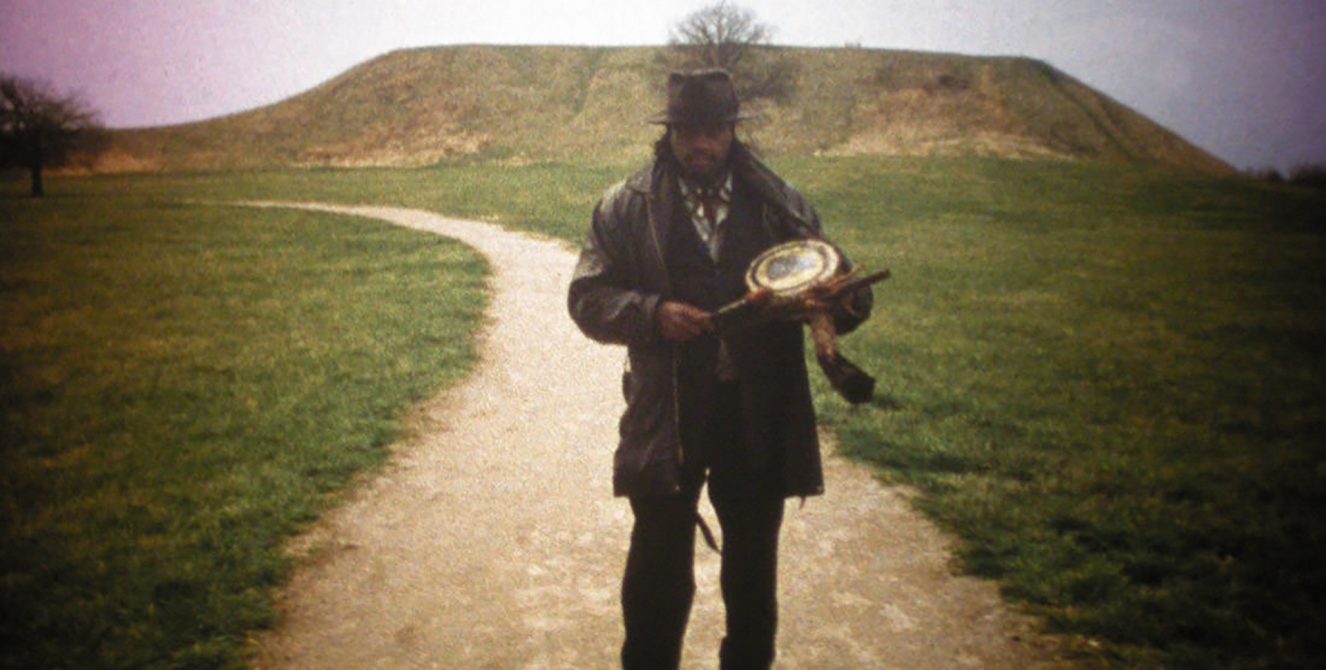 An experimental documentary comprised of regional vignettes about faith, force, technology and exodus. Eleven parables relay histories of settlement, removal, technological breakthrough, violence, messianism and resistance, all occurring somewhere in the state of Illinois. The state is a convenient structural ruse, allowing its histories to become allegories that explore how we’re shaped by conviction and ideology.

The film suggests links between technological and religious abstraction, placing them in conversation with governance. Locations are those where the boundaries between the rational and supernatural are tenuous. They are “thin places” where the distance between heaven and earth has collapsed, or more secularly, any place that bears a heavy past, where desire and displacement have lead us into or erased us from the land. What began as a consideration of religious freedom eventually led to sites where belief or invention triggered expulsion. The film utilizes reenactment, archival footage, observational shooting, inter-titles and voiceover to tell its stories and is an extension of previous works in which the director questioned foundational American tenants.

The Parables consider what might constitute a liturgical form. Not a sermon, but a form that questions what morality catalyzes, and what belief might teach us about nationhood. In our desire to explain the unknown, who or what do we end up blaming or endorsing?

“I’ve seen Deborah Stratman’s The Illinois Parables only once, but I’m eager to see it again. A dense weave of found and original sights and sounds, this hourlong film is at once an experimental documentary, a work of historical excavation and an insistently moral ideological critique. It’s also a lament, one that uses Illinois to sift through history in 11 sections, including the Trail of Tears and the forced removal of the Cherokee Nation. As she moves across both time and place, locating ghosts and tapping voices as different as those of Emerson and the Black Panther Fred Hampton, Ms. Stratman finds a country that is as haunted and haunting as her film.”
– Manohla Dargis, The New York Times

“A beautiful ghost of a film. Stratman makes intuitive and delicate connections between her subjects, often letting a dense and rather brilliant sound design lead us into the woods and out again.” – Chicago Tribune

“Stunning. One of the most striking examples of documentary filmmaking you’re likely to see anywhere this year.” – Sight & Sound

“One of the most quietly radiant movies of recent memory.” – Film Comment

“The best film I saw at this year’s Berlinale was The Illinois Parables… Stratman’s rhythms are seductive, her chosen histories fascinating.” – RogerEbert.com

“The movie is fascinating because whatever interpretation you give the parables, the film takes you to interesting places in unusual ways, making it a pleasure to develop your own elucidation.” – Journal of Religion and Film

“In Deborah Stratman’s film, the ugly reality of human nature, the power of faith and the danger of human ingenuity are all examined through a masterful presentation of both archival footage and audio recordings.” – Vox Magazine

« Sight Unseen presents In The Jungle
Free Film at the Parkway: Daughters of the Dust »