The last female wild beekeeper in Europe must save the bees and restore natural balance — special event opening night! 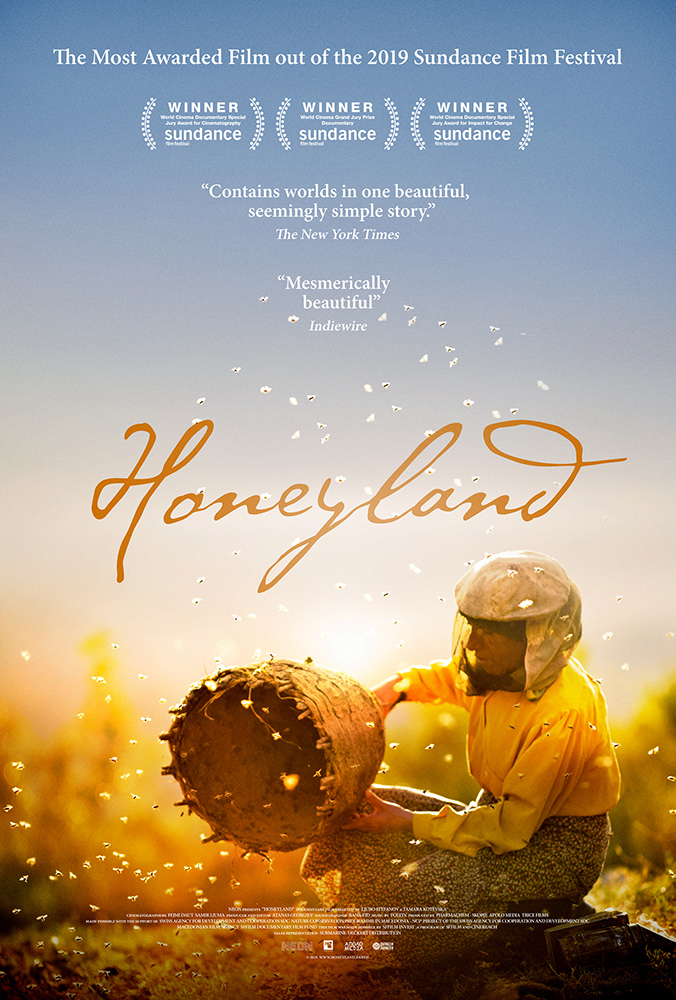 Join us for a special premiere event for the 7pm screening of Honeyland on Friday, August 23!

Specialty honey-based Charm City Meadworks and Baltimore Spirits Company cocktails will be available at the Parkway bar throughout the evening.

Local Made In Baltimore business Hon’s Honey will be in the Parkway lobby prior to the 7pm screening with samples of their signature honey. Hon’s Honey is a purpose-driven business dedicated to giving dignity and purpose to women survivors of addiction, sex trafficking, generational poverty, and trauma.

Nestled in an isolated mountain region deep within the Balkans, Hatidze Muratova lives with her ailing mother in a village without roads, electricity or running water. She’s the last in a long line of wild beekeepers, eking out a living farming honey in small batches to be sold in the closest city — a mere four hours’ walk away. Hatidze’s peaceful existence is thrown into upheaval by the arrival of an itinerant family, with their roaring engines, seven rambunctious children and herd of cattle. Hatidze optimistically meets the promise of change with an open heart, it doesn’t take long however, before a conflict evolves that exposes the fundamental tension between nature and humanity, harmony and discord, exploitation and sustainability.

The debut feature from documentarians Ljubomir Stefanov and Tamara Kotevska, Honeyland is made with the widescreen sweep of an epic, yet clearly built from an intimate collaboration between filmmakers and subject. With a surprising sense of humor, it’s a tough and tender portrait of the delicate balance between humankind and nature, an glimpse at a fast disappearing way of life, and an unforgettable testament to one extraordinary woman’s resilience.

Read the interview with Ljubomir Stefanov and Tamara Kotevska in Moveable Feast about the incredible experience making the film.

Winner of the Grand Jury Prize, the Cinematography Award, and a Special Jury Award for World Cinema Documentary at the Sundance Film Festival

“Far from a scolding, rub-your-nose-in-it depiction of environmental havoc, this is a tender story about the chaos of abandoning the common good.”
— David Ehrlich, IndieWire

“An unforgettable vérité character study and an intimate look at an endangered tradition.”
— Sheri Linden, The Hollywood Reporter

“As the world continues to suffer ever-increasing mass die-offs of honeybee colonies, Ljubomir Stefanov and Tamara Kotevska’s film reminds us that there’s indeed a better way to interact with our planet—one rooted in patience, tradition, and a true respect for our surroundings.”
— Keith Watson, Slant Magazine