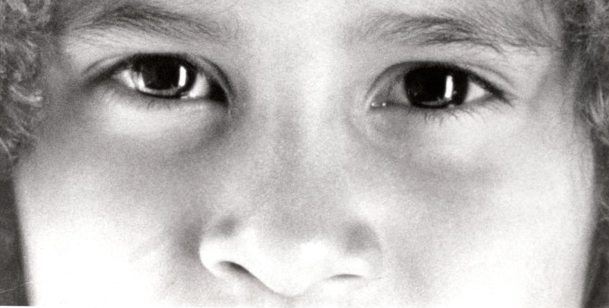 FALLING LESSONS is a film about eye-contact and fear, and about how nourishment can be gained from a look. It takes the form of a series of encounters between the individual in the audience and the individuals on the screen.

The film uses faces as an alphabet. The eyes of almost 200 adults, children and animals are composed, word-like, into sentences and paragraphs, by look, expression and tone. These images seem to fall or to ascend, caught with us in a slow maelstrom. One by one they look us in the eye, and sometimes comment as they pass. We are caught in a complex tapestry of gestures, sounds and voices. Off-screen dramas are suggested. Plot-lines form in the mind.

Notes on the score
The score of FALLING LESSONS is a composite of virtuoso musicianship, machine noises and natural sounds. The acoustic jazz bass foundation is provided by Tony Dumas. South Indian classical singing master Lakshmi Shankar sings to a classical jazz bass line (for her first time). Mongolian hoomi singing is contributed by David Hykes and his Harmonic Choir, and tap-dancer Sandman Simms is joined on percussion by jazz great Billy Higgins. Also contributing to the original score are Toni Marcus on strings, Kerry Campbell on saxophone, John Sinclair on Scottish war pipes, Chalo Quintana on drums, Tito Larriva on guitar and vocals, Jose Lorenzo on berimbao and Marilyn Donadt on The Wing, a 5 foot long steel construction which is struck with mallets and variously stroked with violin bow, drumsticks, brushes and rubber balls.

The film is designed according to musical structures older than the film medium. Its shape is based on the chaconne, an ancient Moorish dance form constructed on a descending bass line. This descending line finds its visual analogue in the repeated tilting motion of the camera. This is also played out in various ways on the sound track. For example, the film opens with an unorthodox rendition of Tommaso Vitali’s Chaconne of 1750. The violin is accompanied by a bass continuo made up of fog-horn, piano, didgeridoo and sirens. The moaning, keening sound of the Brooklyn Bridge as traffic crosses its grating is another sinking sound that works into the descending bass line.

REVIEWS
“A healing film… All the people in it seem naked.”
– Ornette Coleman

“Halpern’s 64-minute “Falling Lessons” is a stunningly sensual, life-affirming experience from a major experimental film artist that is open to myriad meanings. The film is a rhythmic montage of almost 200 faces, human and animal, that Halpern pans vertically, creating a cascade of visages…The glimpses of life going around all these faces have an unsettling, even apocalyptic quality, and the film forces you to consider living beings and their value collectively rather than selectively.”
– Kevin Thomas, L.A. Times

“The camera’s continuous upward movement through these shots creates the illusion that its subjects are in a free fall through the field of its attention, and generates a momentum that links the shots together, as if there were following each other continuously through space, cuing awareness that this fall is created filmically as they follow each other on the celluloid in its vertical passage through the projector.”
-David James in A Most Typical Avant-Garde
“The visual perspective shifts ever upward, entrancingly, and the images flow in a sensuous free-associative montage. Are we looking up or falling backwards? Is this an optimistic gesture or one of loss of control?
-Josef Woodard, Santa Barbara Independent