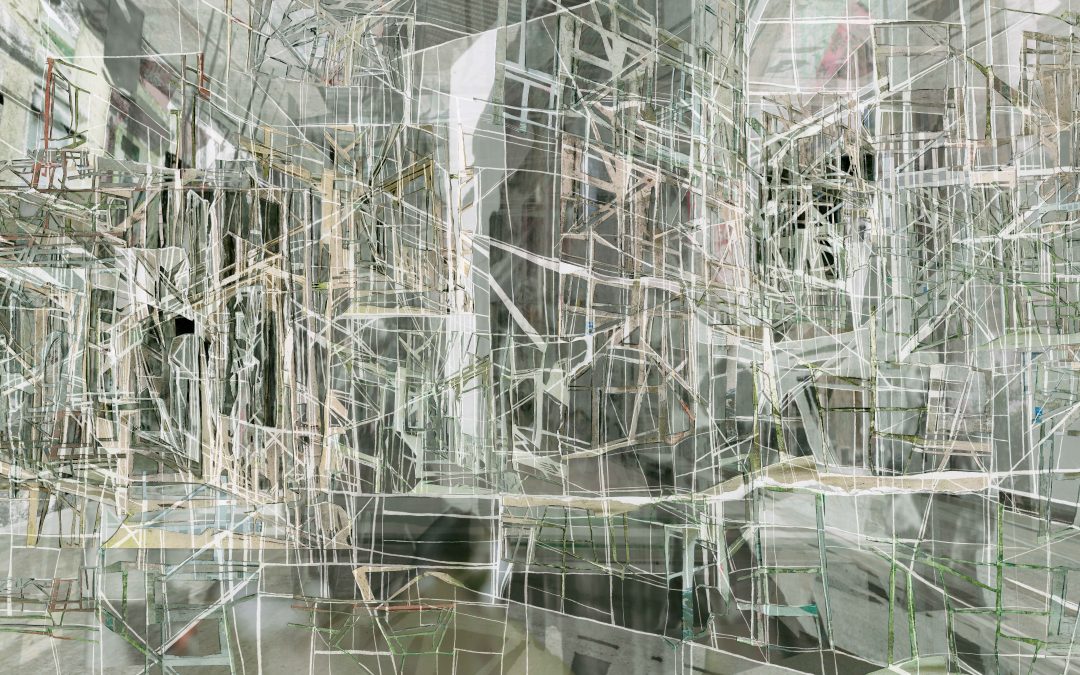 Our Breaking Codes emerging artist series at the SNF Parkway Theatre highlights filmmakers and artists who are redefining and pushing the boundaries of what we know as film. The Parkway will host virtual reality and digital media artist Haoran Chang in residence for his newest installation, Wen Xi: Tracing Fire, on exhibit in the first floor Dietz Lounge and second floor lounge. Originally scheduled from March 26 to April 2, this program has now been postponed.

Chang’s long-term Fire in the City project has evolved over the course of several years into his upcoming exhibition at the Parkway. Taking inspiration from his own upbringing and family relations in Wenxi, China, a keen interest in the construction and understanding of historical events, and the current expanding artistic opportunities in virtual reality, Wen Xi: Tracing Fire is a culmination of Chang’s extensive research and art creation around the Wenxi Fire of 1938. We sat down to chat with Chang about the ever-growing scope of Fire in the City and his personal passions surrounding the project ahead of his installation opening on March 26.

What drew you to virtual reality as a means to create and explore art rather than (or in addition to) traditional film?

The first time I tried virtual reality was in 2015. My friend and I bought an Oculus DK2, and we made a VR installation together. I was fascinated by how the audiences can be immersed in a different space by looking at a screen. I had training in painting, and I felt like the way of layering the information seen through a screen in virtual reality is another level of “flat painting”. The relationship between flatness and dimensionality in VR is what I was really interested in exploring.

In virtual reality, audiences have more freedom in looking and exploring the virtual world, which is very different from traditional film. In traditional film, audiences are more likely to follow what the director sees. But in virtual reality, where and what the audience will look at is somehow out of control. Being surrounded by virtual space, the audience can be more aware of the existence of their body in an alternative space. The 6-degree of freedom in VR can bring more awareness of space and body. There are many many interesting things in VR I am still exploring and experimenting, like the cutting techniques and different interactive mechanisms. I think VR gives artists another tool to create and experiment with. In the process of experimenting with VR, I always go back to traditional film. There are many things we can learn from traditional film and try to break in VR.

Other than the medium specificity, I think it is interesting to explore this medium because of the trend of gamification in our society. VR has a really close relationship with the video game. The workflow of VR is very very close to the video game development, and the biggest market in VR is video games. Also, the popularity of video games and how it changes our aesthetics and visual culture is significant. Experimenting with VR also enables me to think about the meaning of gamification.

You opened your own gallery, Chameleon Gallery, in 2018 showcasing VR and digital media based art. How has it been being both an art curator and an artist in your own right?

Like the name of the Chameleon, I want to build up a flexible platform to invite artists who are interested in expressive media to show their pieces in this virtual platform. To me, curating shows and meeting other artists who also do VR is a learning process. I did not take any VR classes, and this is still relatively new in the institution. Curating VR shows was a great learning opportunity for me to think about the relationship between different media and learn from other VR artists. I think curating VR shows and making my own VR projects really benefit each other in thinking about this media conceptually, technically, and practically.

A lot of your work shows a keen interest in exploring and re-examining historical events. What inspired you to link history and art in your projects?

The most fascinating thing to me about history is that we can never see the complete picture of it and it is continuously in the process of forming. Although the past is so fluid, we always try to find many different ways to anchor it and make it into history. There is a very specific historic story behind my projects, but I am also interested in how history is formed as a collective memory. How the past enters into the present. How the digital tools are utilized in (re)constructing the past.

Your Wen Xi: Chasing Fire exhibit opening at the Parkway has ties to some of your earlier work, including the 2017 documentary Cao’s House about your grandfather. How do your personal ties to the Wenxi fire of 1938 inform your work on this piece?

I think one of drives to initiate this project is my curiosity about what is the Wen Xi Fire. I was born and raised in Wenxi. I heard of it but I did not know much about it. So, I started doing some research. It is very personal to some extent, especially the first piece I finished is a documentary about my grandfather. Cao’s House is more like a piece for my grandfather and I showed it to my family. Probably this is the only piece that I have ever shown in my family. There are so many special connections between the city, history and my grandfather’s life. I only included a fraction of it that is relevant to the project. This is very personal and special, but I think this also echoes many people of the older generation. The whole project is very close to me, but there is also a distance. I did not live in that period of time and I was not familiar with this historic event at all before doing this project. I think the Wenxi Fire of 1938 is close to me but also far away from me. This special distance also affects how I construct the whole project – less about the history itself but more about how history is constructed and its relation to the present.

What do you see in the future of your Fire in the City project?

I think this is an open-ended project. I have some sketches of how to bring different chapters of this project together. For instance, I sketch some hierarchical physical structures to layer all the pieces together. Other than thinking about the different layout of the project, I also constantly change it. The VR piece I exhibit this time is different from the original version I showed two years ago. One of the beauties of digital media is that you can always change it if the software and hardware are not expired. I have other materials in my drive, and I think these can be reorganized in many different ways. This project is about a fire in the city, but I also want to have a conversation about the growing city. I hope the project can grow with the changing city.

How would you like audiences to interact with and support your work as an artist?

I hope my audience can look at my work not as separate pieces, but consider them as a whole. There are many connections between them as a system, and it is very important to me. As an artist, mainly working with digital media is hard. Also, it is not cheap to work with VR. This is a relatively new market for the work I am doing. But I have some prints, and I try to sell them to support myself financially.

Haoran Chang will host a special program on Wen Xi: Tracing Fire for the installation’s grand opening on Thursday, March 26 at 7:30pm at the Parkway. Get tickets here.